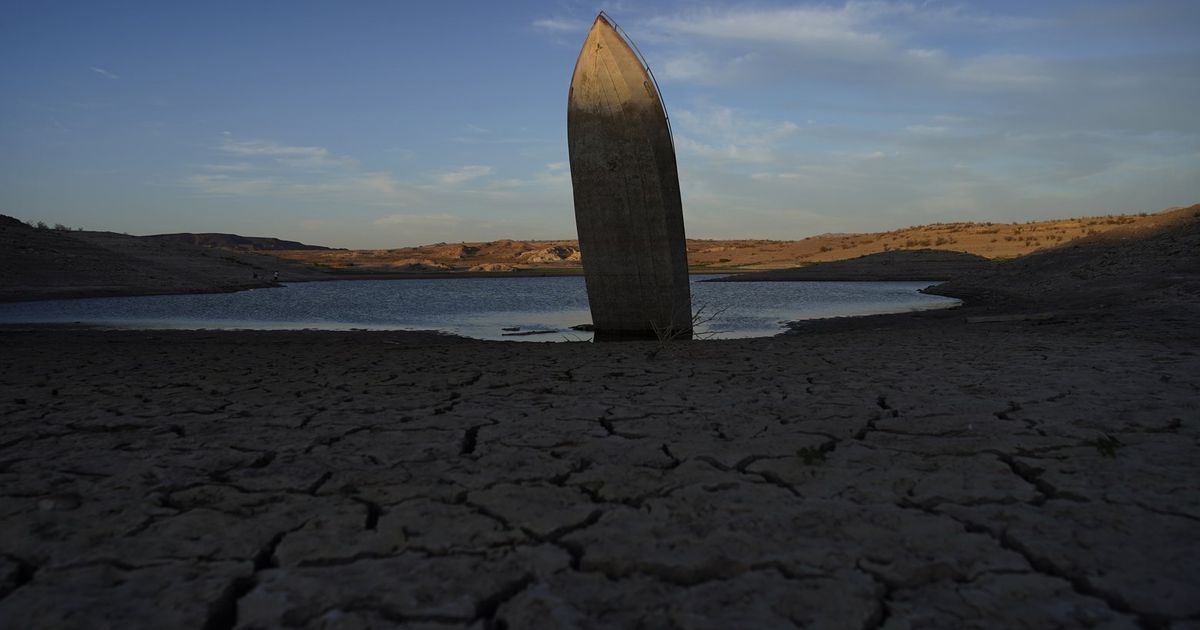 With the Colorado River’s depleted reservoirs continuing to drop to new lows, the federal government has taken the unprecedented step of telling the seven Western states that rely on the river to find ways of drastically cutting the amount of water they take in the next two months.

The Interior Department is seeking the emergency cuts to reduce the risks of Lake Mead and Lake Powell, the country’s two largest reservoirs, declining to dangerously low levels next year.

“We have urgent needs to act now,” Tanya Trujillo, the Interior Department’s assistant secretary for water and science, said during a speech on Thursday. “We need to be taking action in all states, in all sectors, and in all available ways.”

Trujillo’s virtual remarks to a conference at the University of Colorado Law School in Boulder underscored the dire state of the river under the stresses of climate change, and the urgency of scaling up the region’s response to stop the reservoirs from falling further. She provided details about the federal government’s approach to the crisis two days after Reclamation Commissioner Camille Calimlim Touton announced that major cuts of between 2 million and 4 million acre-feet will be needed next year to keep reservoirs from dropping to “critical levels.”

For comparison, California, Arizona and Nevada used a total of about 7 million acre-feet of Colorado River water last year.

State officials and managers of water agencies have yet to determine how they could accomplish such large reductions in water use. Finding ways of achieving the cutbacks will be the focus of negotiations in the coming weeks between representatives of the seven states and the Biden administration.

“The Colorado River Basin faces greater risks than any other time in our modern history,” Trujillo said.

“There is much more work to be done in the basin because the conditions continue to worsen and deeper shortages are projected,” Trujillo said. “We need to do more than we’ve ever done before.”

After more than 22 years of drought compounded by warmer temperatures with climate change, Lake Mead and Lake Powell have declined to their lowest levels since they were filled. The two reservoirs now sit nearly three-fourths empty, at just 28% of full capacity.

The latest projections from the federal government show that absent large shifts in water use, the reservoirs are expected to continue dropping over the next two years.

Lake Powell, on the Utah-Arizona border, is forecast to decline more than 30 feet by March, putting the water level about 16 feet from the point at which Glen Canyon Dam would no longer generate electricity.

The surface of Lake Mead, the country’s largest reservoir, now stands at 1,045 feet above sea level. It’s forecast to drop more than 26 feet by July 2023. If Lake Mead were to keep dropping, the level would eventually approach a danger zone at 895 feet, below which water would no longer pass through Hoover Dam to supply California, Arizona and Mexico — a level known as “dead pool.”

Trujillo said she remains optimistic “that we can get through this.” But she also said it’s a “very, very sobering situation.”

The Colorado River begins in the Rocky Mountains and is a vital source for about 40 million people and farmlands from Wyoming to Southern California. The Colorado has long been heavily overused, with so much water diverted to supply farms and cities that the river’s delta in Mexico dried up decades ago, leaving only small wetlands.

The flow of the Colorado has declined nearly 20% since 2000. Scientists estimate that about half the decrease in runoff in the watershed has been caused by higher temperatures linked to global warming. And this heat-driven drying, which scientists describe as “aridification,” is projected to worsen as temperatures continue to climb.

The amount of runoff flowing into Lake Powell this year is estimated to be just 59% of average.

“We are facing the growing reality that water supplies for agriculture, fisheries, ecosystems, industry and cities are no longer stable due to climate change,” Trujillo said.

Last year, the federal government declared a shortage on the Colorado River for the first time, triggering cutbacks in water deliveries to Arizona, Nevada and Mexico. Farmers in parts of Arizona have left some fields dry and fallow, and have turned to pumping more groundwater.

The cuts have yet to limit supplies for California, which uses the largest share of Colorado River water. But that could soon change as federal officials push all seven states to participate in diverting less water.

The Interior Department could unilaterally impose cutbacks, but Trujillo said the goal is to work with the states to develop plans for scaling back diversions.

“We have the responsibility and the authority to take the action that we need to take to protect the system,” Trujillo said. “We know we will be served better if we take action collectively.”

Agriculture consumes about 80% of the water that’s diverted from the river, much of it to grow crops like alfalfa, which is used to feed cattle and exported in large quantities.

Because agriculture represents such a large share of water use, farming areas will bear a sizable portion of the water-saving burden. Some previous deals have involved paying growers who volunteer to temporarily leave portions of their land dry.

On average, cities across Southern California that are supplied by the Metropolitan Water District typically get about one-fourth of their water from the Colorado River. But this year, with the drought restricting other supplies from the State Water Project, the region is on track to receive about one-third of its water from the Colorado — an amount that will now be constrained by the order to conserve more.

Trujillo said federal, state and local officials will evaluate options to “develop the additional conservation that we are going to need.”

American officials also met with their Mexican counterparts this week, she said, to discuss how to cooperate.

Trujillo said she wants the region to avoid a chaotic response.

“Our collective goal is to be able to very quickly identify and implement strategies that will stabilize and rebuild the system, so that we don’t find ourselves constantly on the brink of a crisis,” Trujillo said.

Last month, the Interior Department intervened to protect the water level of Lake Powell. The agency announced a plan to release 500,000 acre-feet of water from Flaming Gorge Reservoir upstream and leave an additional 480,000 acre-feet in Lake Powell by reducing the quantity released from Glen Canyon Dam.

Trujillo said the measures aimed to guard Glen Canyon Dam’s ability to generate hydropower, keep water supplies flowing to nearby communities and protect infrastructure at the dam. She said in a recent letter to state officials that if Lake Powell were to drop below its minimum level for producing power, the dam’s facilities would face “unprecedented operational reliability challenges.”

Below that level, water could still be routed through four 8-foot-wide pipes, the dam’s river outlet works. But the capacity to release water would be reduced. And officials aren’t sure how the dam’s infrastructure would fare at those levels.

Trujillo wrote that Glen Canyon Dam “was not envisioned to operate solely through the outlet works for an extended period of time and operating at this low lake level increases risks to water delivery” and infrastructure, issues that “raise profound concerns regarding prudent dam operations, facility reliability, public health and safety.”

Speaking to the conference, Trujillo said extra water is being held in Lake Powell to protect the dam and ensure it can continue to function reliably. Larger water reductions are needed for the same reason, she said, to “protect that basic infrastructure” so it will continue to “operate in the manner that it was designed.”

The river was divided among the states under the 1922 Colorado River Compact, which allocated the water among states in the river’s Upper Basin (Colorado, Wyoming, Utah and New Mexico) and states in the Lower Basin (Arizona, Nevada and California). Separately, a 1944 treaty established how much water Mexico would receive.

The way the compact divided the river, splitting 15 million acre-feet between the Upper Basin and the Lower Basin states, is now colliding with the reality that the river’s average yearly flow since 2000 has been about 12.3 million acre-feet, and in recent years has dwindled further.

While grappling with the immediate crisis, representatives of the seven states are also preparing to negotiate new rules for dealing with shortages after 2026, when the current rules expire.

The federal government will issue a notice this month as it begins accepting input on those post-2026 rules. Trujillo said officials will consider the effects of climate change and the reduced flows in the river.

There are 29 federally recognized tribes in the Colorado River Basin, and tribal leaders have pushed to be included so they can play a larger role in talks on the river. Trujillo said officials have been meeting with tribes and will have a “process that is more inclusive going forward to ensure that our tribal communities are engaged at a greater level than ever before.”

In seeking solutions, Trujillo said Interior Secretary Deb Haaland is involved and “we have the attention and support from the White House.”

Trujillo said substantial funding is available to help under the $1.2-trillion infrastructure law, which included $8.3 billion for the Bureau of Reclamation. She said funds can be used to repair infrastructure, improve water efficiency and bolster the response to shortages by helping local entities develop water-saving programs.

Trujillo said federal officials don’t have any “pre-baked” formula for coming up with the necessary water reductions.

“We’re going to have to be very creative and develop a large list of potential options,” she said. “We’re going to likely be in a situation of doing things we’ve never done before. And we’ll have to have guts to be able to move forward.”