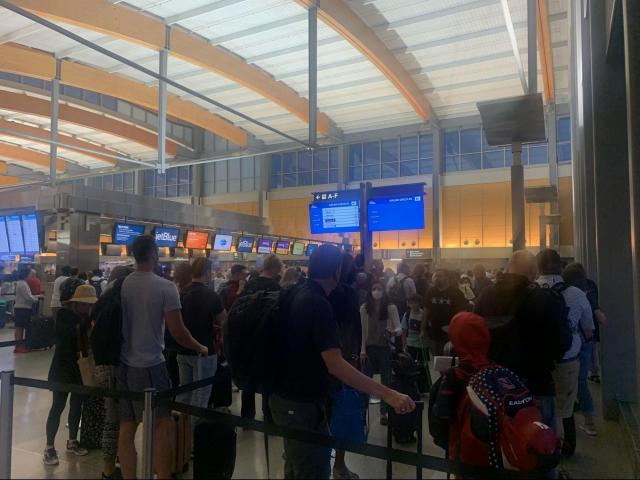 Morrisville, N.C. — After a weekend of airlines grappling with thousands of cancelations and delays across the country, the numbers are looking better on Monday at Raleigh-Durham International Airport.

WRAL’s Lora Lavigne was there at 6 a.m. and reported a long, winding line at the TSA checkpoint. A spokesperson from RDU said it was taking travelers about 20 minutes to get through security.

Flight Aware showed 153 cancellations and 40 delays on Friday morning at Charlotte Douglas International Airport — more than at any airport in the country. Over the weekend, there were thousands of cancellations across the country.

On Monday, there were three delays and eight cancellations at RDU. You can track the status of your flight here.

Two women WRAL News spoke with Friday at RDU said they are delayed until at least Sunday. Jillian Slowinski’s Delta Air Lines flight to Atlanta got canceled on Friday. However, her ultimate destination is overseas.

“We are traveling with teachers all over North Carolina and visiting Zimbabwe,” Slowinski said. “We will be visiting schools and visiting museums.”

On Friday, Slowinski and fellow teacher Ally Edwards waited for about three hours at RDU.

“This is having a big trickledown effect on everything,” Slowinski said. “We had another group that left for Charlotte, and they are there without the rest of us.”

Edwards said she was preparing for a 15-hour flight.

“We are teachers, so we kind of expect the unexpected,” Edwards said. “It is frustrating.”

On Friday, traveler Kiara Brown was trying to visit Munich, Germany, which is where she was born.

“This is my first time back,” Brown said.

Brown was trying to go from RDU to Charlotte to Germany. She won’t be able to leave until Sunday at the earliest.

Brown explained the reason she was given for her flight cancellation.

“It was crew, crew cancellations and weather,” Brown said.

Brown explained her feelings about the flight cancellation.

“I am not an emotional person, but I almost cried when they told us,” Brown said. “I have been looking for this for 30 years now. Yes, it was supposed to be my return back.”

“[We are] working schedules early on so that there will be supportable early on so we have as few hiccups as we can on a given day,” Reisinger said.

“It takes a long time to get someone trained and up to speed and have enough flight hours to command one of these aircraft,” Reisinger said. “So, how do we get ahead of the curve and just help people choose to do that?”

Reisinger explained how air travel is a “complicated operation” and acknowledged there will be “hiccups.”

“Obviously, it is affecting services levels at American, but we are working through it,” Reisinger said.

A viewer sent WCNC Charlotte a photo showing how jammed-packed the airport was.

A reporter for the Charlotte station called the scene inside the airport a “zoo.” Most of the delays and cancellations were impacting American Airlines flights.

The issue in Charlotte appears to be weather-related.

You can track any flight at any airport using the WRAL Flight Tracker.