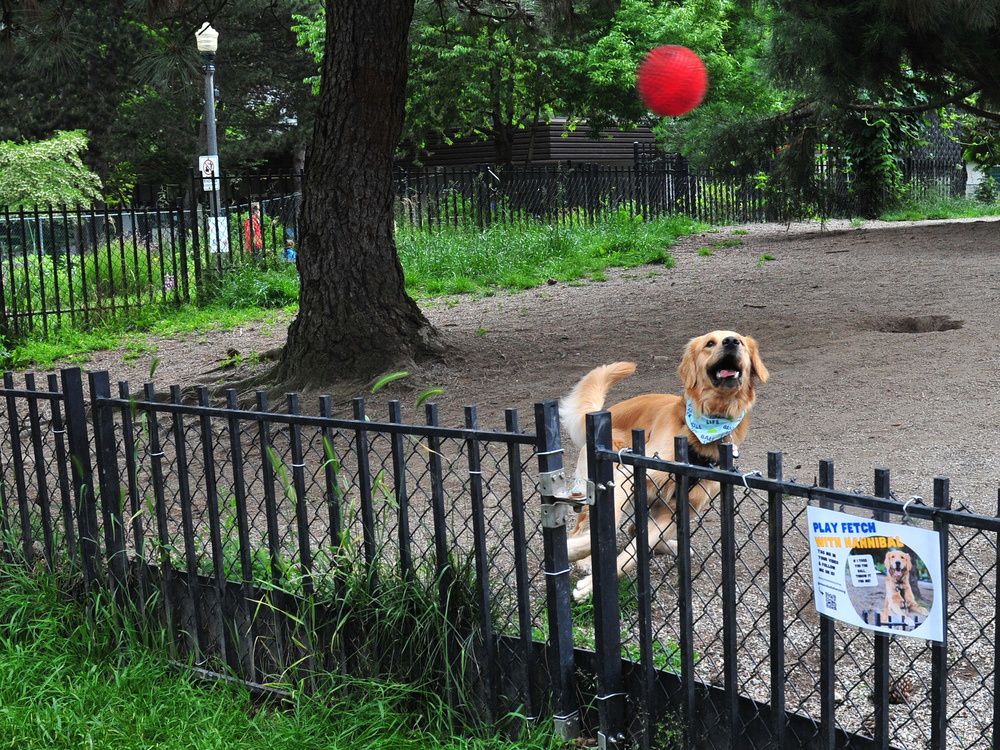 Hannibal prefers playing out of bounds.

The 18-month-old golden retriever is obsessed with fetch. But the regular visitor to the Nelson Park dog park in Vancouver’s West End does this with a twist.

Rather than have someone inside the grounds of the dog park toss his toy for him to chase and retrieve, he actively seeks out random passersby to do the deed.

So many people have been surprised by the big dog dropping its brightly coloured ball over the fence for them to toss that he’s become a local online celebrity. Signs on the park perimeter proclaim “Play fetch with Hannibal: Then tag me in your video on Instagram #HannibalisFetching.” There is even a QR code for “more adorable fetching content.”

“He took to it without any training and used to play with me when he was really young, but quickly got bored of that and began playing with the other people in the park,” said Power. “One day, the ball got thrown outside the ground, someone picked it up and threw it back and he had a revelation that he could play with the whole city going by. Now he’s the easiest dog to tire out because he does it on his own.”

Just don’t change locations and he’ll play all day. Come inside the gates and you don’t exist.

“Kids will throw the ball for him a few times outside the fence, then come in and get completely ignored,” said Power. “He’s already off along the boundary of the park looking for someone new to get involved in the game. He doesn’t even care about food that much, as he’d rather be playing.”

A software engineer from Belfast, Power has been on Instagram for awhile. He admits he wasn’t very active. That’s changed now that he oversees the account of a budding neighbourhood celebrity.

“People at the park had been watching his over-the-fence antics for awhile and finally said that if I didn’t make an Instagram for him, they would, so I set it up,” he said. “I didn’t actually post the signs around the park though, someone else who sometimes walks him did that. Now he has more Instagram followers than I do.”

Hannibal may only have 130 followers so far, but a community of digital dogs is growing. Among those he follows are murphythebrownlab, bernie.blueberry and the one and only rocket_bully.

More news, fewer ads: Our in-depth journalism is possible thanks to the support of our subscribers. For just $3.50 per week, you can get unlimited, ad-lite access to The Vancouver Sun, The Province, National Post and 13 other Canadian news sites. Support us by subscribing today: The Vancouver Sun | The Province.

Sign up to receive daily headline news from the Vancouver Sun, a division of Postmedia Network Inc.

A welcome email is on its way. If you don’t see it, please check your junk folder.

The next issue of Vancouver Sun Headline News will soon be in your inbox.

We encountered an issue signing you up. Please try again